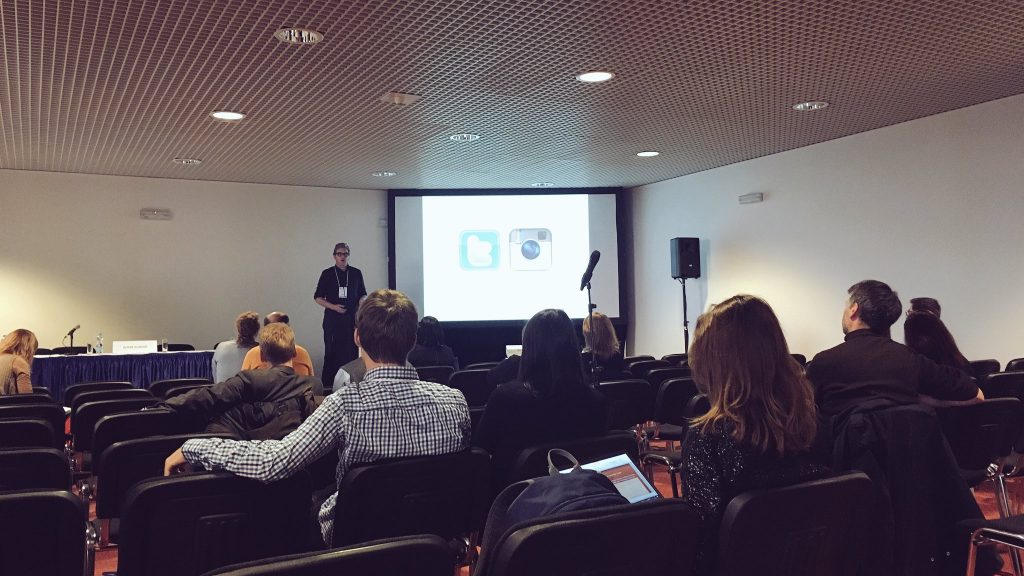 Just got back from Prague and the 2016 European Communication Conference, arranged by ECREA (yes, that’s me presenting in the picture above. Thanks to Carlota M. Moragas for providing the picture). Besides participating as commentator in the Journalism Studies Division PhD Student pre-conference workshop, I kept busy with a series of presentations – abstracts available below:

News media organisations are increasingly dependent on social media intermediaries like Facebook and Twitter to distribute content and to facilitate the public debate (Canter 2013, Hille and Bakker 2013). Likewise, social media have become important professional tools for journalists in their everyday work practices (Hedman 2014, Hermida et al. 2012). While there are obvious advantages for news organizations and for journalists to utilize social media platforms, dilemmas related to these uses are also found. Of particular relevance to this paper is how the use of social media potentially blurs the line between the professional and the private roles of journalists (Rogstad 2014). The paper at hand investigates social media use among journalists from an editorial point of view. Research has documented how different journalists use social media for a number of work-related practices (Hedman and Djerf- Pierre 2013, Hille and Bakker 2013). However, there has been less focus on this topic from an editorial perspective. Such a focus is useful to gain insights into “the contextual complexity” (Fenton 2010, p.3) surrounding the use of new technology in the field of journalism and the production of news. The study is guided by the following research questions: How are the expectations for social media use among journalist expressed in news media organisations? And how is the potential blurring between the professional and private role discussed and managed? The study builds on a mixed-method approach. First, qualitative elite interviews with thirteen chief editors in leading national and regional media organizations have been carried out. Second, a representative survey directed to members of The Norwegian Journalist Association (NJ), were conducted. The questionnaire was sent out to all 7446 registered journalists and received a response rate of 21.7 % (N= 1613). Our study shows that the expectations to social media use differ both in form and content. In the survey, the journalists were asked if they had guidelines for social media use in their company. 30 % (N=479) of the journalists answered no, 48 % (N =740) confirmed they did, while 21 % (N=332) were not sure. Among those who had guidelines, 68 % (N=501) reported that they included advice on what they should or should not say as a journalist, while 53 % (N=386) had guidance about what they should say privately. Furthermore, 49 % (N=361) of the journalists report that the guidelines included information on how to share content, 37 % (N=271) on how to follow up their own stories in social media, and 35 % (N=260) on how to engage in dialogue with the audiences. In the qualitative interviews the the general impression is that guidelines often are developed on an ad hoc basis due to the dynamic nature of social media. Asked to reflect upon on the blurring of the professional and the private roles on social media, many chief editors stressed that journalists should be visible, but also cautious on social media. The authors discuss how this delicate balance often is addressed as problems occur, pointing to a “learning by failing”-approach.

While the degree to which social media are actually contributing to electoral success can be called into question, online platforms such as Twitter are nevertheless seen as integral parts of contemporary election campaigns. Plenty of attention has been devoted to Twitter in particular, leading to what must be considered as a dearth of research looking into the uses of other social media services. The paper at hand seeks to remedy this apparent research gap by presenting a study comparing Twitter – with a more recent contender, the image-sharing service Instagram. The specific empirical setting for studying the uses of these two services is the 2015 Norwegian municipal and regional elections. Norway, often understood as one of the Nordic welfare states features a party-centered political system and advanced levels of Internet use – at the hands of citizens as well as government officials. As such, the Norwegian context appears as a suitable one in which to analyze recent developments regarding the platforms under scrutiny. While the two platforms under scrutiny certainly differ in many aspects, they nevertheless share a number of commonalities. For example, the use of hashtags, keywords employed by users to thematically ‘tag’ their posted content as relevant for a specific event, occurrence or topic, is common on both Twitter and Instagram. Hashtags dealing with the election at hand were utilized for data collection. Our focus was placed on the ‘short campaign’ – the final month of campaigning leading up to election day, which took place on September 14th, 2015. Data collection was initiated on August 14th and was terminated two days after Election Day in order to catch the electoral aftermath. Initial results indicate that while Twitter emerged as having a reactive relationship to specific events taking place in established media, such an association with established media was not found for Instagram. As such, Twitter use continues its clear association to political debates and the likes, while political Instagram use appears to go in another direction. As for what types of political actors that succeeded in gaining attention on each platform, differing tendencies were found for Twitter and Instagram respectively. While previous scholarship had suggested that Twitter use would be characterized by normalizing tendencies, with comparably larger actors dominating the discourse, the results contrarily show the platform to be characterized by activity undertaken by or related to comparably small political actors. Conversely, the suggestion from previous research that a comparably new service like Instagram would be characterized by equalizing tendencies – with a high presence of smaller political actors – proved to be erroneous. Much like for the relation of social media use in relation to established media discussed above, Instagram thus appears to be developing differently from Twitter.

So-called social media in particular are often discussed in terms of potentially invigorating modern democracies through novel means of outreach for political parties. Adopting conceptual notions of permanent campaigning, suggesting intensive efforts by such actors also outside of election seasons, the current paper presents an overarching study of Facebook use by Swedish political parties during and inbetween two elections – 2010 and 2014. Our specific interests are geared towards distinguishing between the activities undertaken by established and less established parties, where the latter group have often been pointed to as having especially valid reasons to partake online in this regard. The study also takes the types of feedback received into account, differentiating between so-called likes, shares and comments. The main findings indicate that while less established actors show tendencies towards a more permanent employment of Facebook, their established competitors are generally more successful in gaining leverage on the platform.

Moreover, together with most of my fellow editors for the Routledge Companion to Social Media and Politics, Routledge hosted a book launch with champagne and all. Proof (picture by Routledge Media and Culture) is available below. Also, note the supreme photo bombing skills of the guy coming in from the right-hand side. Does anyone know who this guy is?

All in all, ECREA was a productive conference, and I look forward to the 2018 Lugano meeting.