Earlier this week, I was interviewed by Norwegian Public Service Broadcaster NRK (you can see the piece here) regarding some work I have been doing on the how political actors (parties and politicians) make use of their Facebook Pages – and to what degree their activity spreads through the platform at hand. The figure below is referred to in the brief interview and I thought I’d post it here as well. Please click on the image to enlarge it if necessary. 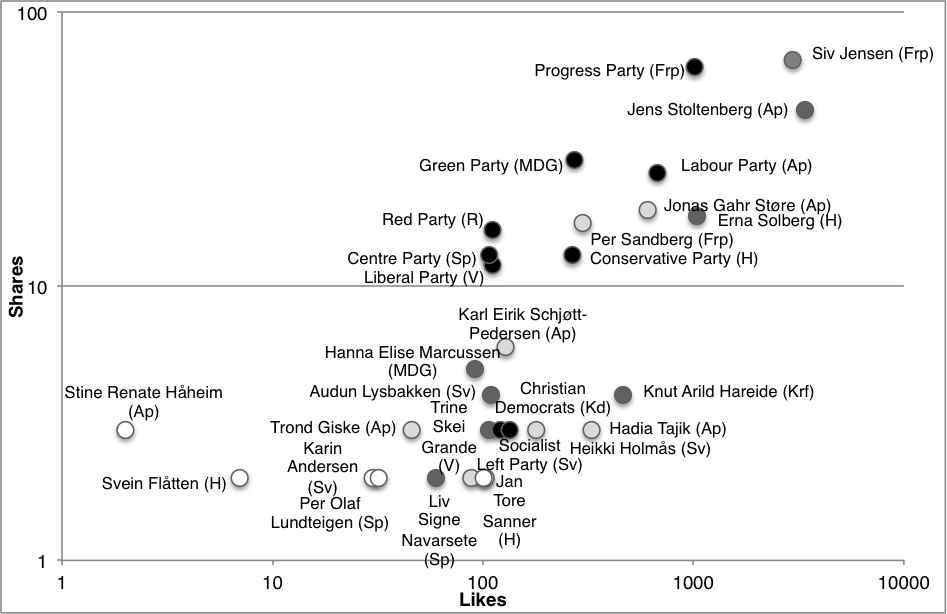 Starting with the Norwegian case, the figure above finds the node representing the official party account for the right-wing populist Progress Party – as well as the node corresponding to their party leader, Siv Jensen – to be among the political actors enjoying the highest medians of likes and shares per Facebook Page Posts. Beyond these and other top actors in this regard (such as PM Jens Stoltenberg), all political party accounts save for two (Socialist Left and Christian Democrats) are positioned above the horizontal dividing line, indicating the apparent popularity of official party accounts. As for the two parties below the aforementioned middle line, these are both small parties in terms of voter share. This suggested relationship between ballot recognition and Facebook Page post popularity is perhaps particularly interesting when considering the case of the Socialist Left Party. From another analysis – not published here – we could tell that while their official party account produced the highest yield of Page posts during the studied period, the figure above shows that their reach in terms of Likes and Shares was comparably limited. As a small Party, albeit with seats in government and a role as incumbents going into the 2013 elections, the Socialist Left Party appears to have had some difficulty in getting their messages across on Facebook.

This finding on the activities of an incumbent but small party on the left side of the Norwegian political spectrum can be contrasted with the spread that other accounts, operated by somewhat similar parties, appear to have enjoyed. Consider the nodes representing The Green and Red Parties in the figure above – both without representation in parliament. As visible here, these parties appear to have hosted comparably popular Facebook Pages, resulting in corresponding nodes placed in the middle of the figure. Taken together, this would seem to indicate that while party size appears to hold explanatory power regarding the online coverage enjoyed by parties, smaller, non-imcumbent parties are indeed able to get their message across on Facebook.

In a couple of days, I’ll post results regarding the popularity of Swedish politicians on Facebook. Stay tuned!