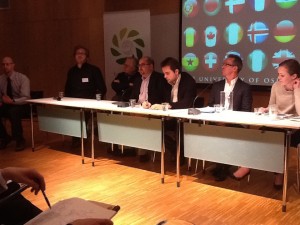 This morning I presented part of my Phd thesis work during the International Symposium on Media Innovations at the University of Oslo, Norway. As the picture (source here) shows, there was a panel discussion afterwards – that’s me second from the left, way back in the shadows. 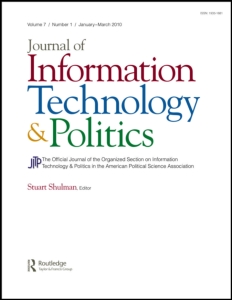 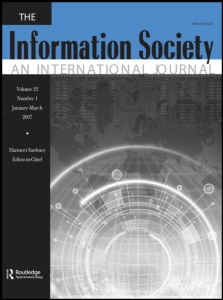 During the last couple of weeks, two papers I’ve written have been accepted for publication in two journals that I have followed since my start in academia. While it is satisfactory in itself to have your work accepted in journals that you’ve followed for some time, I am extra happy with these particular publications since they are both based in large parts on my PhD dissertation. As such, both papers take structuration theory [1, 2] (as developed by, in turn, Anthony Giddens and Wanda Orlikowski) as their starting points. The first of the two papers, Understanding non-use of interactivity in online newspapers – Insights from Structuration theory (to be published in The Information Society) discusses how the recursive relationship between macro and micro levels of society outlined in the theory can be employed in order to further understand what one of the reviewers of the paper called “the disappointments of online journalism” – why most readers and journalists do not tend to use interactive features in the online newspaper context. By using terminology derived from the work of Giddens and Orlikowski, the paper provides an overview of research done on audience-journalist interaction and suggests some ways forward for researchers and practitioners.

Similarly, the second paper, ‘Rejected bits of program code’ – Why notions of “politics 2.0” remain (mostly) unfulfilled (to be published in Journal of Information Technology & Politics), takes the same theoretical starting point but places its focus on the supposed potential of the Internet to rejuvenate political participation among the broader citizenry. While hopes regarding such a potential have generally been held high (especially now, in the “2.0” era), most empirical research on the matter has provided results indicating passivity in voters and somewhat cautious attitudes on behalf of politicians. As with the former paper, conceptual tools derived from structuration theory are used in order to explain why these somewhat conservative behaviors are apparent. Just got this test print of my phd thesis from the printers. Looks good, to me at least. The cover picture turned out good, save for the small “wavy” traces visible above. The printers assured me that this will not be an issue with the final edition. The whole batch will be delivered on april 24th.