In a couple of previous posts, I compared the activity popularity of Swedish and Norwegian politicians on Facebook during a time when the latter of these countries underwent a parliamentary election – the idea being to look for tendencies of so-called permanent campaigning. In the present and coming post, I have looked more closely at the Norwegian data and tried to delve into two aspects of Facebook use at the hands of politicians – first, the division of likes, comments and shares between the party leaders; second, that same division across different themes posted about. Lets look at the former of these first. The data here were collected during a one-month period leading up to the elections, held in September of 2013. Please note the comparably small median shares and comments per post – a finding that suggests a need to re-think the so-called viral potential of social media services like these (at least in the context at hand). 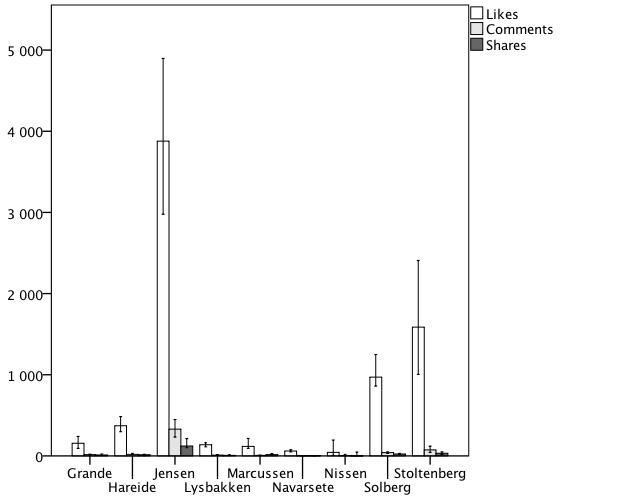 The figure gauges the median amounts of likes, comments and shares per posts made by each party leader during the specified period. The error bars visible in the figure indicate the confidence intervals (95 %) for the reported medians, suggesting considerable variations regarding these metrics – especially with regards to the median amount of likes per post. With these distributions in mind, we can nevertheless conclude that especially in terms of likes, the leaders of the three largest parties – Stoltenberg (Md = 1587), Solberg (Md = 970) and Jensen (Md = 3878) – emerge as the most popular. As such, the suggestion made by Vaccari in his study of political web sites during the 2007 French presidential elections that larger parties “usually have stronger ICT infrastructures due to their superior resources” (2008: 6) appears to hold true also in a social media context (see also Gibson and McAllister, 2014). Jensen in particular stands out – especially when it comes to the median amounts of comments and shares. Here, the leader of the right-wing populist Progress Party appears to have enjoyed comparably larger amounts of success in terms of raising discussion and leveraging the viral aspects offered by the sharing functionality.

Sources cited:
Gibson, R. K., & McAllister, I. (2014). Normalising or Equalising Party Competition? Assessing the Impact of the Web on Election Campaigning. Published before print in Political Studies
Vaccari, C. (2008). Surfing to the Elysee: The Internet in the 2007 French Elections. French Politics, 6(1), 1-22.