Attending a conference and a concert (I am visible in this picture – can you see me?)

I was recently interviewed by Michael Bossetta for his Social Media and Politics Podcast. Among other things, we discuss some of my comparative research efforts looking into how Swedish and Norwegian political parties have made use of their social media channels over the last couple of years. Check out the episode above or on the podcast web site.

Succeeding in raising engagement is key for anyone who wishes to be seen online – perhaps especially for political actors. However, such engagement or indeed interactivity can be demanding for politicians and parties since there is an increased risk of losing message control. In ‘Win a sweater with the PM’S face on it’ – A longitudinal study of Norwegian party Facebook engagement strategies, I use the theory of controlled interactivity (as defined by Stromer-Galley and Baldwin-Philippi) to discuss how the Facebook engagement strategies of Norwegian political actors have varied over time. The abstract reads as follows:

“Receiving Facebook post engagement – such as likes, comments and shares – is crucial in order to succeed online, perhaps especially for political actors. However, online engagement can also be hazardous, as it potentially strips the original poster of control over their messages. Previous work has shown that political actors have been rather unwilling to encourage interaction from their online supporters. However, research has also indicated a need to assess the influence of Facebook in this regard. Building on the theory of controlled interactivity, the study presented here details what is referred to as Facebook engagement strategies among Norwegian political parties on Facebook between 2009 and 2019. Combining quantitative and qualitative approaches in order to compare party and follower activity in relation to the aforementioned engagement varieties, the main findings indicate that parties and followers do not necessarily seek to interact at the same time. Furthermore, tendencies towards gamification, where parties direct user attention towards online quizzes and raffles instead of towards deliberation and political discussion, can be discerned.“

The three posts visible above serve as examples of posts where parties ask for engagement in terms of comments. Comparably early posts featuring comment engagement cues encourage readers to comment on specific political themes or topics. For these posts, parties will typically offer to answer the posted questions in the comments. Section 1 in the image above depicts a typical example of such a post from the Progress Party, linking to a YouTube video where a party representative presents budget suggestions, asking for feedback by means of comments to the Facebook post. The use of video services external to Facebook is also rather typical of this early period of Facebook use by political parties – overtime, Facebook native services have largely overtaken their external competitors when it comes to posting video on the specified platform. A tendency of contests and quiz-like competitions with party merchandise prizes has already been noted. This tendency is mirrored also in sections 2 and 3 from the image. Section 2 provides an early example of such content – here, the Socialist Left Party presents a giveaway of t-shirts featuring a ‘Heller kolje enn olje’ (‘I’d rather have haddock than oil’) print, pitting two core Norwegian industries against each other. Finally, section 3 features an example of the Conservative Party Advent calendar from the 2019 holiday season. Here, we are asked to guess the name of the first female Norwegian Minister of Defence. A correct answer gives us the chance to win a garment with the PMs face on it – a t-shirt this time, rather than a sweater as in another example discussed in the paper. This tendency of almost gamified political communication is visible also elsewhere in the material.

The paper is available open access at Information, Communication & Society.

I just received word that my follow-up study to Picture-perfect populism: Tracing the rise of European populist parties on Facebook has been accepted for publication in New Media & Society. In this recently accepted paper – entitled The rise of Instagram as a tool for political communication – A longitudinal study of European political parties and their followers – I build on the findings of the aforementioned Facebook-focused paper and provide insights into the uses of Instagram by European political parties. The abstract reads as follows:

“Featuring a longitudinal, structural study of European party and citizen activity on Instagram between 2012 and 2018, this paper outlines the overarching changes in the ways that Instagram has been employed for political party communication. Differentiating between populist and non-populist political parties, the results indicate that much like for other platforms such as Facebook, the former category of parties enjoy higher amounts of citizen engagement than their non-populist competitors. Detailing the uses of different types of posts by the two types of political actors, the study provides insights into how political parties have adopted and used Instagram from 2012 and onwards.”

Much like with the previous paper, I make good use of the brilliant Wes Anderson Palettes package available for R – see if you can guess which movie palette I used here. If you are interested, you can find the accepted version of the paper at academia.edu or at ResearchGate. Having studied the growth of populism on both Facebook and Instagram, I guess I need to look at Twitter next?

Much like everything else these days, the 2021 NordMedia Conference which was supposed to take place in Reykjavik has decided to go virtual. Which means that this year, I will be virtually involved in three presentations:


Given the ongoing pandemic, the 2021 ICA conference will be held online – hopefully by 2022 we will be back to physical conferences… Anyways, my contributions this year will be as follows:

Boulianne, S. & Larsson, A.O. (2021). Engagement with Candidate Posts on Twitter, Instagram, and Facebook during the 2019 Election. Paper accepted for presentation at the virtual 71st Annual ICA Conference, may 27-31.

New publication out – this one took a little over a year from start to finish. The paper, which has been published online in New Media & Society, deals with the rise of populist parties in Europe and the ways in which such parties appear to dominate Facebook in terms of gaining traction on the specified platform – especially when using audio-visual means of communication. The abstract reads as follows:

“This article presents a longitudinal, structural study where party and citizen activity on Facebook is studied over a 10-year period, outlining the growing importance of audio-visual content for online campaigning purposes – as well as the rise of populist parties on the same platform. The study shows that an overall increased focus on video as a means of communication emerges as especially pertinent for native Facebook functionalities. This could have repercussions for how online political communication messages are fashioned – and also for the dependencies on platforms that are supposedly strengthened as parties make choices regarding where to invest their campaign resources. In terms of citizen engagement, the results indicate the dominance of populist parties, who have strengthened their positions on the studied platform. The dominance of populist actors will likely have repercussions for the algorithmic spread of political messages – as well as for the ways in which political messages are shaped.”

Accepted versions of the paper are available at academia.edu or ResearchGate, the publisher’s version can be found here – and if I have understood things correctly, a few free pdf copies should be available following this link.

A paper I co-authored with Øyvind Ihlen and Ketil Raknes was recently awarded the best paper award during the 2019 EUPRERA conference. Here’s what the jury had to say about our paper, entitled “The democratic success of Twitter as a lobbying tool”:

The paper discusses the contribution of Twitter to democratic goals of engagement and debate by asking “What type of interest groups and organizations succeed in having members of parliament react on (retweet) their Twitter messages?”. To answer this question, the authors analyzed the extent to which Norwegian politicians retweet messages from interest groups and lobbyists during normal parliamentary activity. Despite the touted democratic potential of Twitter, the researchers find that it is the powerful groups and organizations that get heard more by politicians, also on Twitter. The paper is excellently written with solid links to the relevant literature and sound methodology. 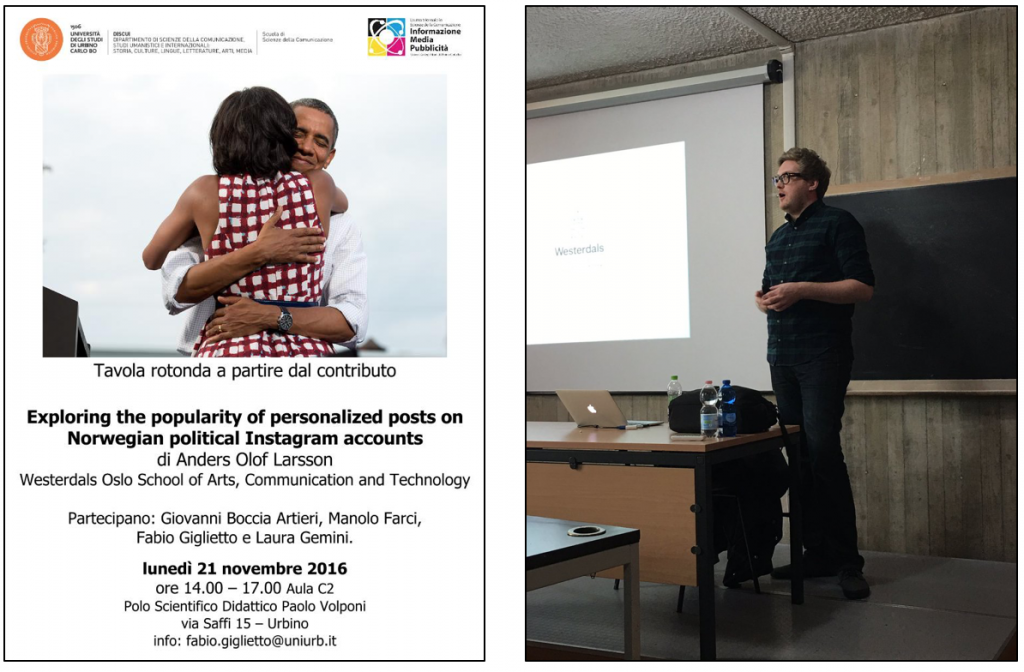 I’ve spent the last couple of days at the university of Urbino, hosted by Fabio Giglietto as part of an ERASMUS teacher exchange between Westerdals Oslo ACT and the department of communication studies at the aforementioned university. Urbino proved to be a lovely little town – about 15 000 inhabitants live there, to which one has to add about the same amount of students, who mostly commute from out of town. While in Urbino, I held a few lectures and seminars on the undergraduate as well as graduate level, discussing (among other things) the consequences of personalized content on the Instagram pages of political leaders. Please refer to the picture of me in action available above (thanks to Giovanni Boccia Artieri, who tweeted the picture). 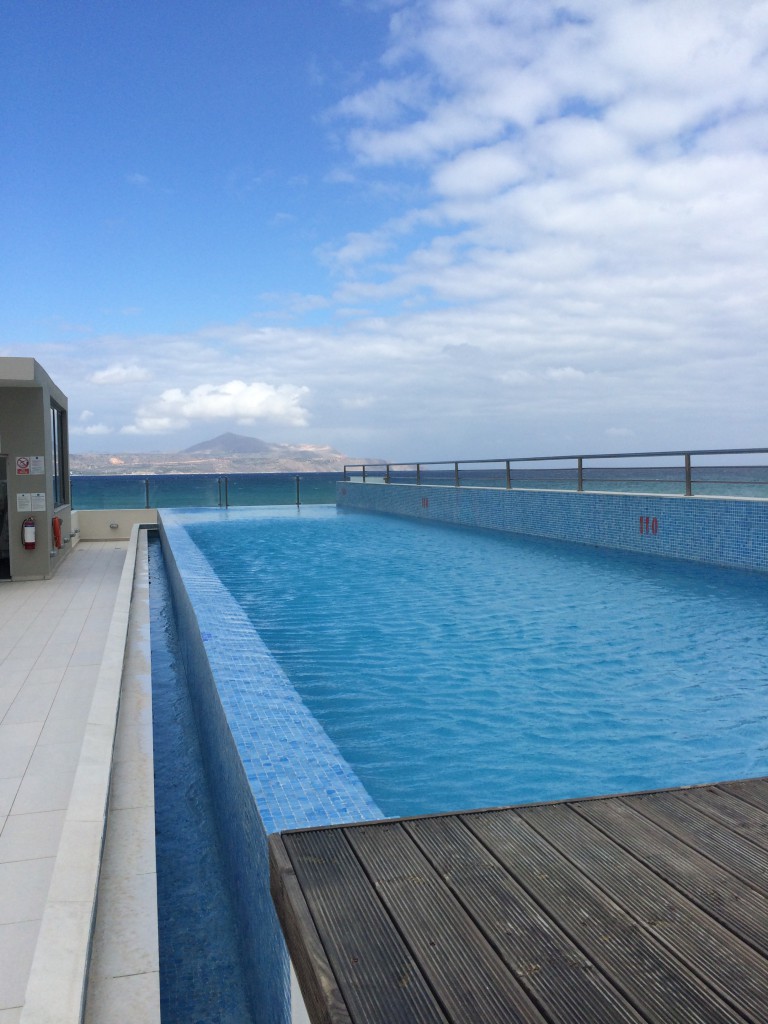