While the previous post compared the overall uses of #val2010 and #val2014, two hashtags dealing with the Swedish elections of 2010 and 2014 respectively, the current post deals with the latter of the two elections. Specifically, I will offer an initial analysis of what users enjoyed the most popularity under the selected hashtag. While popularity on Twitter can certainly be defined and operationalized in a number of ways – number of followers, for instance – I would argue that the degree to which an account is retweeted in a consistent manner is a complimenting, if not even better measure. With this in mind, the network graph below, produced in Gephi, gives us an overview of who enjoyed plenty of retweets under the heading of the specified hashtag – and who appears to have been especially active in sending those retweets. 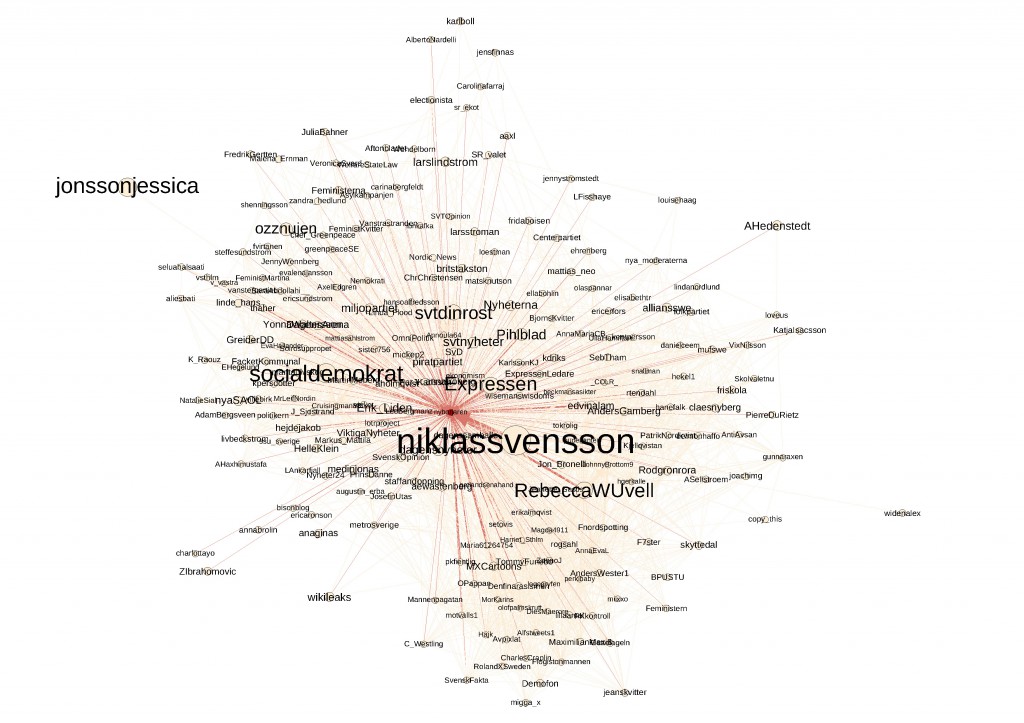 The graph (please click it to enlarge it) consist of a series of nodes, each representing an account. The larger the node, and the label identifying it, the more that particular user was retweeted. The darker red the color of the node, the more active that particular user had been at sending retweets. Moreover, using Gephi’s Force Atlas algorithm, the graph has been delimited to show only the top users in these ways. As such, many of the nodes (accounts) that contributed to the sizes of the other nodes have been omitted so as to only focus on those highly active users. The table below identifies some of the very top users in terms of receiving retweets for #val2014, and compares this distribution with that of the #val2010 hashtag. The latter of these two election hashtag was studied in this paper (pdf).

The table shows how the dominance of journalists and Pirate party associates in 2010 appears to have been broken for the period leading up to the 2014 elections. Indeed, while the Pirate party account is featured also among the 2014 roster of high-end users, and while two journalists did indeed make their mark in this regard (niklassvensson and Pihlblad), the distribution for 2014 appears as more varied than for 2010. Much like for top @reply receivers discussed previously, we see media organizations (such as Expressen), rather than a multitude of journalists, emerge as successful in gaining retweets. Moreover, the presence of a well-known comedian – ozznujen – reflects another tendency identified by similar research, where celebrities gain leverage in online political discussions (see Larsson and Moe, forthcoming). Finally, two anonymous users succeeded in getting their tweets redistributed to high degrees in 2014. The person or persons behind the MXCartoons account provide a statement basically saying that the tweets will feature “common sense over political correctness”, which is instated by largely discussing and criticizing Swedish immigration policy. Perhaps more interestingly, the influence of the user jonssonjessica appears to have emanated from one tweet only. As in the case of the 2013 norwegian election, one such well-formulated and likewise timed tweet can gain attention – if ever briefly. Much like for the Norwegian case, this particular tweet was sent on election night – lamenting the fact that the incumbent liberal-conservative government appeared to have lost the popular vote. As such, while the comparably large node representing jonssonjessica might suggest an influential user, the placement of the node, relatively isolated from the others, suggest that this was largely a ‘one-off’.