I’m currently working on a series of studies dealing with the upcoming Swedish elections. This also sees a shift on my behalf with regards to the empirical focus of my work – while I have been doing research on the political uses of both Twitter and Facebook, my current projects involves a comparative aspect between the two. What follows is a draft of sorts, a way for me to try and gather my thoughts on how to approach the two services from an empirical, comparative perspective. Does this make sense? Any type of feedback would be most welcome, either as a comment or as an email. 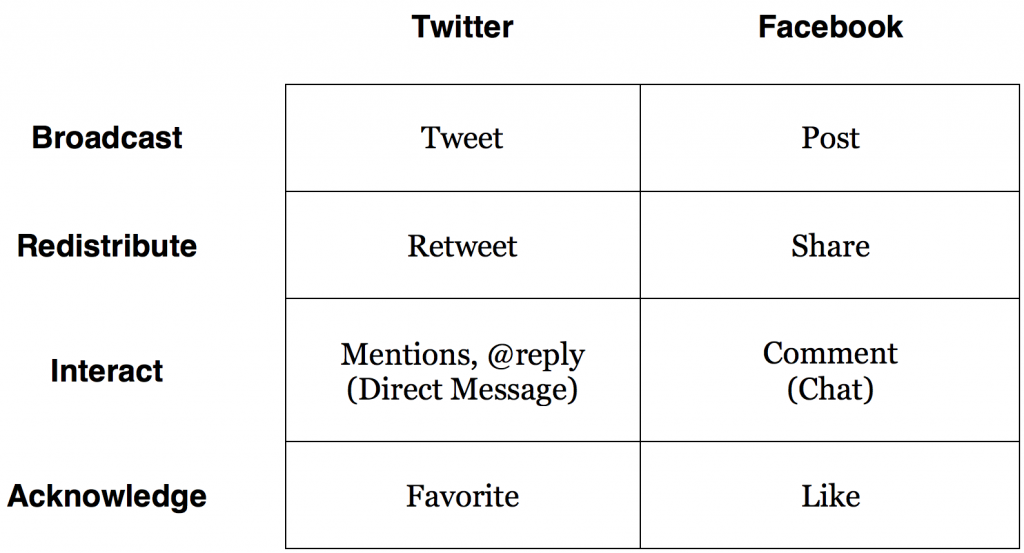 While Twitter and Facebook are often seen as similar in terms of their usage, they are distinctly different in terms of their respective technical infrastructures, service appearance and terminology (boyd and Ellison, 2008). Nevertheless, the argument is made here that the end user of both services are faced with a series of options for usage that are somewhat similar in that they offer comparable modes of communication. The four modes – Broadcasting, Redistributing, Interacting and Acknowledging – and their distinctive counterpart on each platform is presented in the figure above.

First, the very basic notion of Broadcasting entails the act of simply sending a message to a network of followers on either service. While social media uses are sometimes suggested to have moved beyond such largely one-way practices (Honeycutt and Herring, 2009), the Broadcasting variety of social media activity is still very much common at the hands of politicians up for election.

Second, much as Twitter users can employ the retweet functionality to Redistribute a tweet sent by some other user, so can a Facebook user choose to share posts made by others – such as political parties. Indeed, the potential spread of the redistributed message is dependent on a multitude of factors – individual user security settings, platform characteristics, previous choices made et c. (Bucher, 2012). Nevertheless, from the perspective of those actors whose messages are being redistributed in retweets or shares, this type of feedback is very attractive. It allows for their dispatches to potentially spread beyond their own networks, reaching the attractive status of ‘gone viral’ (Klinger and Svensson, 2014).

Third, while Interaction has been pointed to as the defining character of the Internet, uptake of such practices among politicians and parties has been mostly slow and hesitant (Stromer-Galley, 2000, 2014), indicative of the risk of exposure and embarrassment taken when interacting as a politician (Marcinkowski and Metag, 2014). Be that as it may, the functionalities for contacting and commenting are by now a commonplace feature on each platform. For Twitter, the practice of mentioning another user by including their user name somewhere in the body of a tweet signals interaction, perhaps especially so when that mention comes in the form of an @reply, where the user addressed is mentioned at the beginning of the tweet (Twitter, 2014). Morover, both platforms offer more private settings for interaction in the form of Twitter’s Direct Messages and the Chat functionality available on Facebook. These are shown in parentheses in the figure so as to indicate their less than public nature. While citizens might not choose to engage in discussion with political actors in these ways, leaving room instead for the established “Twitterati” (Bruns and Highfield, 2013), gaining comments and @replies can be seen as indicative of having an interesting (or controversial, or both) message to convey – a message yielding reactions in terms of attempted interaction initiated by social media users.

Finally, while Acknowledging features like favorite marking a tweet or liking a Facebook post are perhaps best described along the lines of “clicktivism” (Karpf, 2010) or “slacktivism” (Morozov, 2011), the exact role of these measurements in deciding the influence of a specific user or post on either studied platform remains somewhat unclear. While the sharing or retweeting of posts and tweets are arguably more important for the coveted viral effects to occur (Socialbakers, 2013), the tracking of likes and favorites are nevertheless of interest for our current purposes as they allow us to track the different ways that Twitter and Facebook is employed in the current setting.

In closing, while the procedural definitions of the terms associated with each service might be clear, the current model cannot make any inroads with regards to what these practices entail to each specific user. For example, a retweet might indicate an expression of support for one user, while others may have ascribed different or even fluctuating meaning to this or any of the other practices discussed above (Driscoll and Walker, 2014; Lomborg and Bechmann, 2014). As such, the aggregated view championed here might not be able to delve into these intricacies. Arguably, the approach employed is nevertheless useful, as it provides an overview of actions taken and attention given – whatever form or connotation that attention might take among those giving it.

Driscoll, K., & Walker, S. (2014). Working Within a Black Box: Transparency in the Collection and Production of Big Twitter Data. International Journal of Communication, 8, 1745–1764.

Marcinkowski, F., & Metag, J. (2014). Why Do Candidates Use Online Media in Constituency Campaigning? An Application of the Theory of Planned behavior. Journal of Information Technology & Politics, 11(2), 151-168.