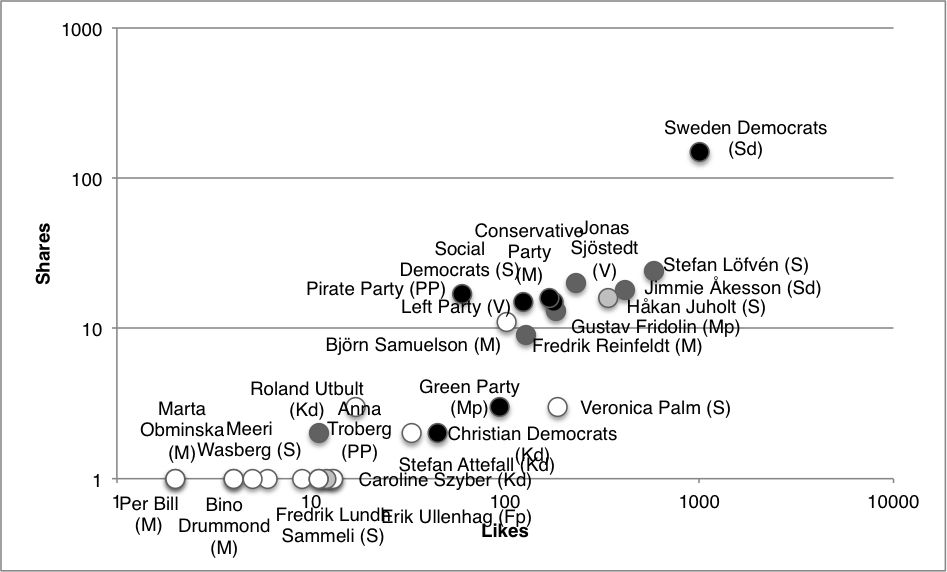 In the previous post, we could see that Norwegian non-parliamentary parties were comparably quite popular in terms of the median amount of Likes and Shares received per post. The figure presented above suggest similar tendencies, although not as stated, for the Swedish case. Consider the node representing the Pirate Party, whose placement in the graph indicates a median of shares per post on par with major, “catch-all” parties like the Social Democrats or the Conservatives. Similarly, the finding that two of the parties in the right-wing coalition currently governing Sweden (the Liberal Party and the Centre Party) are not present in the figure could be an indication of what could be labeled as an ‘ekection year effect’ – seeing as all Norwegian parties (who underwent an election earlier this year) were present as visible in the corresponding figure. With regards to the most popular Facebook Pages, we see another tendency repeated from the Norwegian context. Much like the Progress Party appear to have produced a series of posts yielding high amounts of both Likes and Shares, so do the right-wing populist Sweden Democrats seem to enjoy a similar status in the Swedish context. However, when one considers the change of scale on the vertical axis, representing the median of shares per post – 0-100 shares for Norway, 0-1000 shares for Sweden – the dominance of the Sweden Democrats in this regard is further affirmed. As such, far right parties appear to have succeeded in getting their message across through Facebook in both countries, while this tendency is arguably more affirmed in the Swedish context.