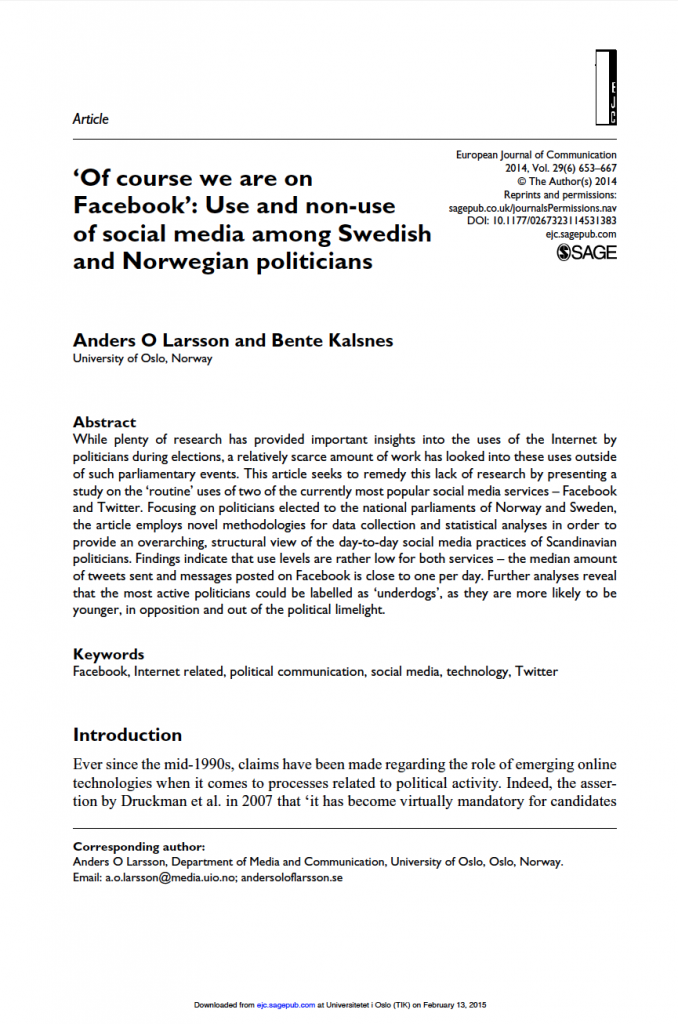 I’m happy to report that the article “‘Of course we are on Facebook’: Use and non-use of social media among Swedish and Norwegian politicians” was apparently the most-read article from the European Journal of Communication during January 2015. The article, which I co-authored with Bente Kalsnes, deals with adoption and use rates of social media by Swedish and Norwegian politicians. The abstract is available below:

While plenty of research has provided important insights into the uses of the Internet by politicians during elections, a relatively scarce amount of work has looked into these uses outside of such parliamentary events. This article seeks to remedy this lack of research by presenting a study on the ‘routine’ uses of two of the currently most popular social media services – Facebook and Twitter. Focusing on politicians elected to the national parliaments of Norway and Sweden, the article employs novel methodologies for data collection and statistical analyses in order to provide an overarching, structural view of the day-to-day social media practices of Scandinavian politicians. Findings indicate that use levels are rather low for both services – the median amount of tweets sent and messages posted on Facebook is close to one per day. Further analyses reveal that the most active politicians could be labelled as ‘underdogs’, as they are more likely to be younger, in opposition and out of the political limelight.

By means of funding provided by my department, we’ve been able to make the paper available for everyone – also for those interested who might happen to reside outside of paywalls, the proprietors of which make Rupert Murdoch look like a socialist.